Playing With My Weiner

Gaming at the mercy of miniature daschunds.

Gee, I wonder what those KOTOR guys have been up to lately. Sure, they’re developing a Sonic RPG for the DS, but that seems pretty small potatoes in comparison to say, Baldur’s Gate.  Yeah, Baldur’s Gate.  I miss that.  I wish they’d do another one.

Huzzah!  The spiritual successor to Baldur’s Gate is Dragon Age: Origins, and BioWare recently confirmed that PC players will have it before April 2009, and consoleans soon after.

Originally just titled “Dragon Age” the ‘Origins’ in the title refers to how your origin and the decisions you make affect the way your story unfolds. This is nothing new for BioWare. KOTOR, Jade Empire, and Mass Effect all had “light side/dark side” decision trees. BioWare considers this sort of character development its particular idiom, and they seem determined to keep honing the technique until every player feels that each of their characters is an entirely unique entity shaped by the player’s own hand.

Unlike in Mass Effect, however, your main character does not have a voice. BioWare told Joystiq at PAX that this was due to the great variability in gender and race for your character. The demo makes it clear that, at least in town, race does matter. In the town we saw, Human Wardens were treated with great honor and respect, but their Elven brethren were far less revered. Humans might experience the reverse in an Elven town, and it remains to be seen how the Orc PCs fit into the whole mess. The specifics of character creation are still under wraps. 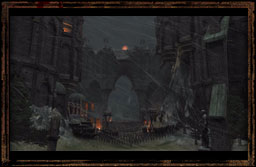 As far as the game world is concerned, the forces shaping the characters in Dragon Age are not your typical D&D high thud and blunder. BioWare has taken a darker tone, complete with real blood and real violence. You play as the Grey Wardens, elite warriors called to task to put down the forces of a risen Old God.

A beheading from the PAX demo.

Combat is classic BioWare pause-and-play, with a decent mix of action and roleplaying every combat. The fight in the 45-minute PAX demo felt solid, and gave the player several options to finish the fight, including butchery and trickery. It is possible that even these choices can affect your character development, but BioWare has yet to confirm this.

As of PAX, the game looks good. BioWare has developed a new game engine for DA that they are calling Eclipse. The game will come with a toolset for user-created content, and one can only expect that with a subtitle like Origins, expansion packs will be on the way.

If Dragon Age: Origins is this promising eight months before its release, I look forward to seeing the depth and polish BioWare puts on the final product.