Playing With My Weiner

Gaming at the mercy of miniature daschunds.

Continuing their cavalcade of “We Don’t Care If You Like It, We’re Just Going To Put Out A New Game Every Month Instead of Doing What The Fans Want And Doing An Actual Retro Game”, Sonic Team has released new screenshots from the upcoming Wii game Sonic and the Black Knight. You can check those shots out over at Kotaku if you like, I’m not wasting space with them here.

In the last few years Sonic has gone to Pseudo-Arabia to make it with a human chick, spun off a gun-toting Shadow, searched deep into his RPG roots, and become a freakin’ werewolf – excuse me, werehog. In fact, he’s done everything but run around really damn fast for 4 hours and collect rings while freeing cute bunnies and saving Chaos Emeralds! For the love of Ceiling Cat and all that is HOLY, Team Sonic, make a damned SONIC game!

Thank you. That is all.

In the beginning there was a hedgehog. Well, maybe more in the post-beginning/pre-middle. Certainly in the early 16-bit era. Yes, by 1991 there was Sonic The Hedgehog. (Note: The “T” in “The” is properly capitalized. Sonic creator Naoto Ōshima registered Sonic with The as his middle name.) Over the last 17 years there have been over 30 Sonic and Sonic-related titles, including such highs as Sonic 2 and Sonic CD, and such lows as Sonic Heroes and Sonic and the Secret Rings. 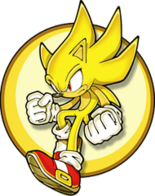 Several of those games have had RPG elements. Chaos Emerald and chao collection could earn the Blue Blur extra powers or lives.  Most games post-Sonic Adventure featured a “Super Sonic” mode, giving the ‘hog even more speed after he collected 50 precious, precious rings.  In Sonic Chronicles: The Dark Brotherhood, BioWare has taken these power-ups several steps further in an attempt to turn Sonic into a “real live” role-playing game.

On a pure mechanics level, they succeeded.  Sonic forms a party, gets quests, earns experience, levels up and collects loot.  The party’s static skills increase automatically with each level, but the player can assign one bonus point to a stat of their choice each level. Every level also brings five more action points that you can either spend on a talent or save for higher levels of a talent.  Pretty standard fare, with the exception of Chaos – cute little creatures which you can collect, hatch, and bond with to add abilities to your team.

Say it COW, spell it CHAO!

The real question is how this stop-and-go framework fits a game world that is all about speed.  The answer is that mostly, it doesn’t.  BioWare has a knack for making pause-and-play gameplay seem fluid (see KOTOR), but mere fluidity is not enough for Sonic The Hedgehog. The developers tried to include running puzzles and loop-de-loops aplenty, but the fact that you have to select Sonic then push a button to enter the loop then have no control whatsoever over where you land or what you do during the “speed boost” completely destroys the illusion of fast.

Where BioWare does try to allow for real speed, it is a complicated mess.  It seems as if they tried to combine their own inimitable style of pause-and-play with the 2.5D action-RPG battles of Nintendo’s  Mario & Luigi: Partners in Time. The problem is that Mario is all about good jumps and better timing, and Sonic is all about running like hell, which does not lend itself to drawn-out battles.  The stylus-controlled special abilities minigames are ill-explained and imprecise, and every special move requires a metric ton of minigame action to pull off.  It makes you want to just hit Attack over and over and over.

All of that being said, the game is not terrible.  The visuals are charming and do hold true to classic Sonic style.  The RPG format in and of itself is an interesting twist for an overused, yet beloved, video game character. And BioWare does bring the story.  For a Sonic game, this baby is deep.  A plot with turns, surprises and revelations, all adding to the Sonic “canon”.  I think the problem is that Sonic doesn’t really need a canon. Sonic needs another good 2D game full of speed and color.  I wish that Team Sonic would take a page from Mega Man 9 and go solidly retro the next time out.  Unfortunately, as the next few Sonic games include Sonic Unleashed (featuring a were-Sonic)  and a sequel to the super-odd Sonic and the Secret Rings, I don’t think I’m going to get my wish any time soon.

For being a colorful and often witty addition to the Sonic family while also being unfittingly slow and imprecise, I’m giving Sonic Chronicles: The Dark Brotherhood 3 Weiners out of 5.